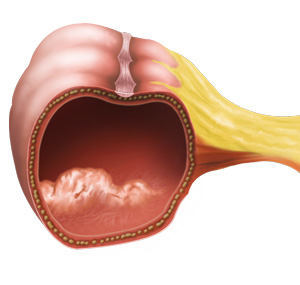 What is Colon Cancer?

Although colon cancer affects people of all ages, it is common in people aged 60 years and above. Certain factors that increase the risk of developing colon cancer include alcohol, smoking, high fat intake, family history of colon cancer, presence of polyps, and increased age (>60 years).

In the early stages, people with bowel cancer may not experience pain. However, the following symptoms may indicate colon cancer:

Colon cancer is diagnosed by symptoms, medical history, and other diagnostic procedures which include:

If colon cancer is confirmed, staging is performed to detect the size, location, and stage of cancer. Staging is performed using ultrasonography or computed tomography (CT) scan of the abdomen, chest X-rays, magnetic resonance imaging (MRI) scans of the bowel, and complete blood count.

Fecal occult blood test (FOBT): It is a test that determines small amounts of blood in the feces. However, this test does not diagnose colon cancer, hence, colonoscopy or sigmoidoscopy needs to be performed.

Treatment depends on the size, location, and stage of cancer. Colon cancer may be treated using chemotherapy, radiation therapy, and/or surgery.

Colon cancer can be treated using anti-cancerous medications or radiation depending on the site and severity of cancer. In addition to these treatments, surgery may be performed to destroy the remaining cancer cells and to prevent cancer from spreading further.

Colectomy is the most common procedure performed to remove the cancer cells. It is the surgical resection of all or part of the large intestine. It is also called a large bowel resection. Colectomy is performed under general anesthesia by open surgery method or by laparoscopic method. The procedure takes about 1 to 4 hours.

In this technique, a single large incision of about 6 inches is made in the lower abdominal wall. The diseased part of the colon is removed and the healthy ends are sutured. If no healthy large intestine is left, an opening or a small incision called a stoma is created on the abdominal wall. The open end of the large intestine is stitched to the skin of the outer wall of the abdomen. Waste will pass through this opening into a bag that is attached outside the body. This procedure is called a colostomy.

It is a minimally invasive technique where several small incisions are made rather than one large incision. Three to five small incisions are made on the lower abdomen. A laparoscope, a telescopic video camera used to see the inside of the abdomen, is inserted through an incision. Small surgical instruments are passed through the other two incisions and the colon is removed. Carbon dioxide (CO2) gas is filled in the lower abdomen and expanded for easy access and the diseased part of the colon is removed. The healthy ends are reattached and all the incisions are closed with sutures.

Complications of colectomy procedure include infection at the site operated, bleeding, and damage to nearby organs.

Some of the ways to prevent colon cancer include high fiber diets and vitamins, avoid smoking and alcohol consumption, lose weight in case you are obese, and leading a healthy lifestyle can lessen the risk of colon cancer.